“It may be a private bargain between me and God, that if I give up this one thing I want so much, however bad I am, He won’t quite of despair me in the end.”

Early morning on I-20 comes slowly. Even from the driver seat of a Ford Mustang GT, cutting the dark blues of the expanding horizon between Abilene and Baird at 90 mph, the sunrise seems to take hours.

Persimmon to grapefruit to apricot; the sun has a way of transforming its color as it pulls itself over the clouds shelves spilling east, bringing rain to Weatherford, Fort Worth, Arlington, Dallas—eventually breaking up over a no-name border town in Louisiana. But not here. Not now.

I love this part of Texas. It’s blue skies, open fields, rusted green cacti and burnt orange longhorns. It’s 65 on a January afternoon and FM roads snaking their way around lakes and the outskirts of small towns that haven’t changed since the 40s.

More than anything else, it’s a rugged sense of freedom I’ve always craved,

I try not to think about tomorrow as I stare at the horizon. It’s hard to leave behind the one thing I want so much.

Lent is easy when you’re a kid. You give up your favorite food but continue eating your next favorite food; you go to church a couple extra times; you trade eating dry chicken on Fridays for eating dry fish on Fridays. And, if you grew up in my house, you had to stay inside and clean your room between 12 and 3 on Good Friday.

Later, you might go through a youth group phase. Or (like me) you might not go through a youth group phase. You’ll encounter a priest who talks about adding service or charity to your routine. Maybe visit a soup kitchen or a nursing home. And you’ll kick back on a Sunday night with only nominally religious traditions, like marveling at how bad an actor Richard Burton was in the 1953 biblical movie, The Robe.

Eventually, you’ll either settle for glossing over or just getting through Lent, or you’ll find yearly meaning and devotion in an increasingly popular culture of asceticism, adopting such practices as taking cold showers, eating only bread and water on Wednesday and Fridays, or (and I have no idea how people actually do this) sleeping on the floor.

I’m being stereotypical—and a tad bit facetious. And I’m not trying to knock those who’ve increased their faith and become better men and women through programs like Exodus 90 or Ninevah 90. But the truth is, there are a lot of us in a third category. We go by many different names: the overwhelmed-by-life guy; the “Bad Catholic”; the failure-to-launch millennial; the distracted dreamer who feels the past and future pressing in on her, wondering if she’ll ever get to where she thought she was going. Maybe it’s best to just call us human.

That unfulfilled nature of being human, and of yearning for something more, for God, is a common theme during Lent. We wear ashes to remind us we’re dust. We fast to feel hunger. We walk the stations of the cross, shifting our weight uncomfortably as we hear “If this cup shall pass,” while knowing full well it won’t. We’re well aware there’s a cost to discipleship—and it often comes with walking away from the one thing we’ve convinced ourselves we need.

But Charles, by this point moving from agnosticism to a general sense of theism, senses something changed in Julia. She explains that the life she thinks she wants can’t save her:

…I’ve always been bad. Probably I shall be bad again, punished again. But the worse I am, the more I need God. I can’t shut myself out from His mercy…But I saw today there was one thing unforgivable…the bad thing I was on the point of doing, that I’m not quite bad enough to do; to set up a rival good to God’s…

The scene is remarkably beautiful. It’s also tremendously unhappy. And, as we start another Lenten season, it weighs heavily on me.

West Texas was supposed to save me.

Four years out of college, I wanted to be anywhere but sitting in traffic on I-97 between Baltimore and Annapolis, watching my 20s slowly tick away in a cascading cycle of work, commute, sleep, repeat. I was at that point in young adulthood where I was becoming acutely aware of what my friends and former classmates had done with their lives, all while slowly drifting away from them and wondering what the heck I was doing with my own life.

Looking back on it, I wanted a lot of things: to write (whatever that meant); to explore; to fall in love; to build. But more than anything else, I just wanted to get away from everything. And maybe that was the problem.

Running has always been easy for me. When I was a kid, I bounced around different schools, never quite fitting in but always managing to get called to the principal’s office. When I became a college student and young adult, I started bouncing around the country, following an infatuation with open spaces, mountains, forests—empty highways under starlight skies.

I kept my religion, but it was just that, my religion. A lot of nature quotes mixed with my voting record, as if a John Muir essay and a Romney/Ryan bumper sticker could replace faith and works as the keys to salvation. When it came to an actual relationship with God, he was like a great uncle—some relative I maybe saw from time to time and talked about surface-level topics with (Great weather today, huh? Maybe you could kick that cold front a bit south?) but for whom I didn’t go out of my way for and definitely didn’t ask for direction.

I wanted a lot of things, but I never really asked myself if I wanted a relationship with God. And, as I ran from the things I thought were making me miserable, I never replaced them with the people, virtues, and activities that would lead me closer to God. And, like Julia found out the hard way in Waugh’s novel, that distance from the ultimate good didn’t lead me to the happiness and meaning I so badly wanted.

I became detached, cold—subservient to an eating disorder that I’d let define most of my adult life and increasingly cynical about the world around me. And, for lack of a better description, I did a lot of really stupid stuff.

By the time I left Abilene—perhaps the hardest decision I’d ever had to make—I realized that if I ever came back, it would have to be under circumstances where I was running toward something, Otherwise, it would be as Julia tells Charles: starting a life without Him. A life without God.

And yet, when I’m stressed, when I’m feeling stuck, when I’m wondering what the heck I’m actually doing with my life, I still turn back to the idea of getting away, starting over—losing myself somewhere west on I-20 where God couldn’t possibly ask anything from me.

Then I remember the last pages of Brideshead Revisited; remember the trust Julia places in God and the uncertain future in front of her. And I remember a poem, used as a prayer, by T.S. Eliot:

Teach us to care and not to care.

Teach us to sit still.

Lent is easy when you’re a kid. But as we grow older, and begin to see our lives in terms of patterns—patterns in actions, relationships, triumphs, faults—the question that used to elicit an answer of “candy,” or “cursing,” or even “texting in class,” becomes more complicated. Not for want of items or behaviors to give up—but for the sake of our souls. We all have it. Maybe it’s a person. Maybe it’s a possession. Maybe, like me, it’s a place, a learned behavior, an idea that the grass is always greener somewhere else, even though, at best, it’s really just tawny-colored.

And, maybe, someday, we’ll be able to enjoy what was once a rival good for what it is, neither elevating it above God nor counting on it to save us. But if we’re ever going to get there, and even if we’re not (and for Waugh’s Julia, this is the case), we’re first going to have to show God we can give up that “one thing.” For some of us: 40 days. For others: well, for however long God is calling us to get ourselves right.

If we do that, we can hope God won’t quite despair us in the end. 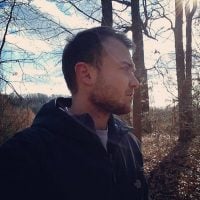 Adam M. Nettina began writing about sports when he was a freshman in college, covering Naval Academy athletics for CollegeFootballNews.com and the Scout.com network. A 2011 graduate of Utah State University, where he worked as a feature writer for the university’s athletic media relations office, he served as an assistant acquisitions editor for the Naval Institute Press before pursuing a master’s in English from Abilene Christian University. Currently a writer in the Franciscan University of Steubenville Marketing and Communications office, he maintains an active freelance writing presence, with work featured in Military History, Naval History, CatholicVote.org, and Ruminate magazine.