The Nativity scene is a very important Christmas tradition in my family. We assemble one of our sets (we have several) in the living room, constructing a full backdrop for it in a little nook under a prayer table. Fabric draped over boxes become hills, and pine tree trimmings become trees. We wrap soft, glowing white lights around the scene and across the back like little stars. Straw and rocks complete the landscape, but we’re not done until we’ve each placed a small animal figurine by the crib. (Mine is a little horse).

The animals are a small and simple devotion, each representing our presence before the Christ Child. But until December 25, the animals, as well as the rest of the figures in the Nativity set, appear to be focusing on a very empty manger. We don’t place the Baby Jesus in the Nativity scene until Christmas morning. He’s kept safe on top of a cabinet, and then the youngest (competent) child places him gently in a bed of straw while we sing “Away in a Manger.”

Devotion to the Child Jesus, whether in the context of a Nativity scene (a tradition initiated by St. Francis of Assisi), or devotion in general, is not new in Catholicism. But when someone now starts a communal prayer with “Sweet Baby Jesus,” they usually get a funny look.

A few weeks ago, I visited Prague. The city, swathed in late November rain, seemed to be preserving roots deep in Bohemian culture, bearing further monuments to the Holy Roman Empire, the Protestant Reformation, and the reign of the Hapsburgs. There, in the Church of Our Lady Victorious, over a side altar halfway up the main aisle, stands the statue of the Infant Jesus of Prague.

The Infant Jesus of Prague, or the Child Jesus of Prague, is about 19 inches tall, foundationally made of wood but coated in wax. He has a child’s face, pudgy with rosy cheeks, framed in gold curls. The liturgical season determines the color of his elaborate vestments: green, purple, red, gold, and royal blue. Made in the 16th century, the figure is believed to have originally belonged to St. Teresa of Avila and later donated to the Discalced Carmelites in Prague by a Czech princess.

Today, pilgrims constantly flow in and out of the church, some trying to be quiet and respectful, others simply checking a box on their Prague sightseeing list. Regardless of intentions, the infant didn’t always receive an abundance of attention.

In the 1630s, a Swedish king invaded the capital of Bohemia, and the Carmelite friary and church were plundered. For seven years, the small statue lay forgotten in a trash heap. But one day, a priest named Father Cyrillus found the statue. The infant’s little hands were broken, but Father Cyrillus cleaned him up and reverently placed him in the church.

Praying before the statue, Father Cyrillus heard a voice say, ”Have pity on me, and I will have pity on you. Give me my hands, and I will give you peace. The more you honor me, the more I will bless you.”

Neither Father Cyrillus nor his friends had the money or skills to repair the statue, but after more prayer to the Blessed Virgin, a visitor to the church saw the statue and was able to fix it. From then, there were more miracles, and devotion to the Infant of Prague, and the Infant Jesus in a broader sense, grew.

Today, many cultures venerate the Child Jesus multiple times throughout the year, but it seems most appropriate to refocus on this devotion near Christmas.

Saint Francis loved the infant in his radically poverty, coming into the world not only in a poor, humble family, but as a vulnerable child. When compared to this baby, a baby wrapped in swaddling clothes, the luxury of the crowned and robed statue seems to portray a completely different person.

But portraying the Christ Child in regal splendor elevates the child in the manger. The rich robes and jewels unveil what was hidden in humility that night in Bethlehem.

So when, on Christmas morning, we take down the Baby Jesus from his spot, safe on top of a cabinet, and place him in the manger, we also place the Royal Child in the straw. Our animal figurines—each a little beat up, none of them perfect—represent not only our devotion to the Incarnate Word, but our reverence to the King of Kings and Lord of Lords. 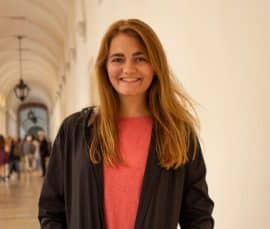 Gruß Gott! My name is Marianna Schmiesing, and I just graduated from Franciscan in May 2018. Deciding to “postpone reality,” I’m spending a year in Gaming, Austria, at Franciscan’s European campus, the Kartause Maria Thronus Iesu.

Here, I help students plan their international adventures, and when that doesn’t keep me busy, I attend a couple classes, write a blog post or two, and go on a few adventures of my own.

My favorite destinations are Vienna, Assisi, Croatia, Pollone, and the Spar grocery store right down the street. When I’m not giving detailed directions on how to get to the airport (“the bus pulls up on the right, but the train station is on the left”), or trying to figure out how to fit 12 outfits in a small travel bag, I like to play over-played songs on my ukulele and day-dream about owning honey bees.